Must Love Dogs ... not only one of my favourite movies but a fun choice to use for this journal page (theme was "movie quote"), especially when put together with Tim's Crazy Dogs. I took it from when Jake was having a chat with the father of his would-be girlfriend (Kate) and says "She was a unique constellation. She was my Halley's Comet." 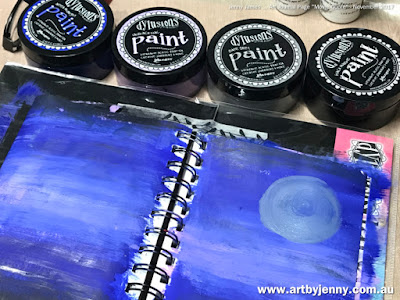 Painted straight onto plain paper in a small spiral bound book. I usually place scrap paper (or in this case, old stencil packaging) behind the page I'm working on to protect the other pages in someone else's book.The background consists of 4 colours of Dylusions Acrylic Paint - After Midnight, Laidback Lilac, Slate Grey and Black Marble. Dyan Reaveley's paint is also for Dylusions Journalsand other mixed media projects.I used a 1 inch wide flat paintbrush to apply the colours. I painted over most of the surface with the dark blue (After Midnight), then added the purple (Laidback Lilac). The grey was used to blend everything together, then black was roughly brushed across the top and bottom of the page. The beginnings of the comet was painted using grey. 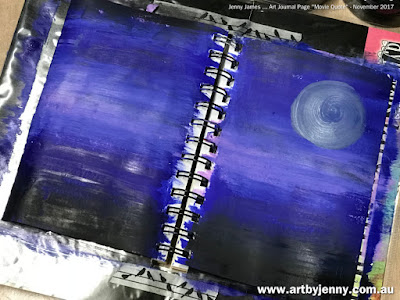 In different lighting, the night sky background was very intense, yet in other lighting the purple was dominant. Its amazing how different colours appear at different times of the day! The pic above is while the paint was still wet. It seems to lighten a bit as it dried. Could have been the extra purple I added before saying "nup, leave it alone". lol :)I left the background to dry completely and went about stamping and colouring the Tim Holtz Crazy Dogs. The obvious choice was for the lovesick puppy to be Jake and I chose the tall dog because labradors are awesome - and he / she was facing the "correct" way for what I wanted. 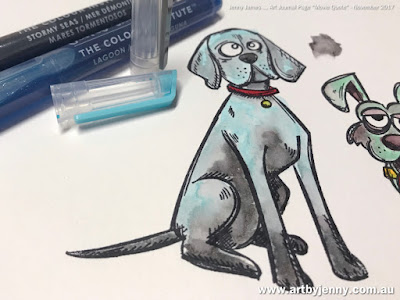 Deciding on colours can be hard sometimes. Its art and just a bit of fun so didn't really want them to be brown, white or black like real dogs - plus I wanted to use the Jane Davenport Mermaid Markers (as I do alot these days... can't help it, the colours are so vibrant and gorgeous!).The girl dog, Kate, (above) was coloured using Lagoon (pale blue) and Stormy Seas (grey). 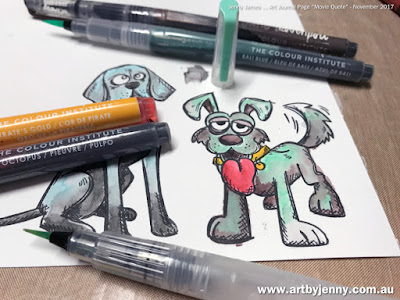 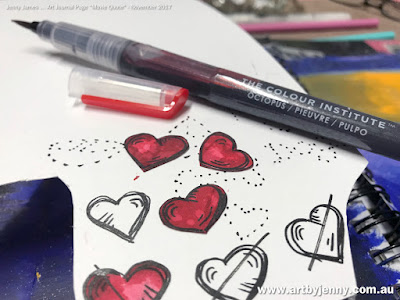 I drew hearts using black pen, then had to draw more because I used the soluble one, not the permanent one and they went blurry when I added the ink from the Octopus Mermaid Marker... a gorgeously rich ruby red. Lucky I love to draw and colour :) This pic also shows my practice pieces for the constellations. 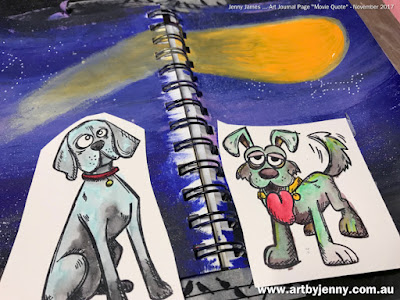 I placed the dogs on the page to gauge where the Halley's Comet was going to fly. Thankfully, the Dylusions Paint dries quite fast so when I painted the comet in Vanilla Custard (yellow), I didn't really have to wait for layers to dry to get that rich, solid round sphere. I added a bit of grey around and along all edges to break up the yellow, to make it appear round.Stars and constellations were added as the page progressed, a few at a time. I used both the Dylusions white paint pen and white Sharpie (extra fine). 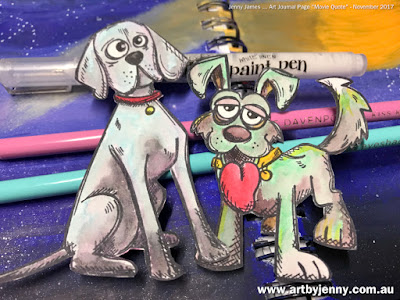 Each dog was fussy cut with fine scissors but you can get Sizzix's Tim Holtz Crazy Dogs Framelits to trim around your stamped images using a Sidekick or other die-cutting machine. They're a great option if you have trouble with scissors (due to things like arthritis and other nasties) or want to cut them out faster.I also added highlights using the Jane Davenport Magic Wands - coloured pencils. I used Kiss Kiss (pink) for Kate while the Eyeshadow (pale aqua) was used for Jake.They're such beautiful pencils to use - creamy, smooth and blend so beautifully. They tend to get a waxy haze (bloom) after a few layers but that can be rubbed away with a finger before adding more. They draw over the top of watercolours and inks really well. 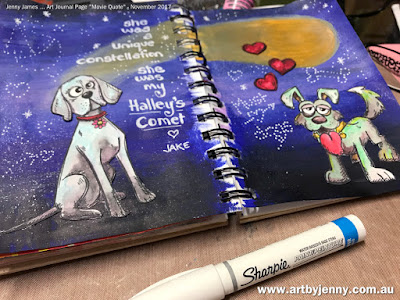 The girl dog received a beautiful set of long eyelashes drawn in black pen, and both dogs had their eyes blackened with pen and the white highlight spotted with the Dylusions white paint pen.The quote was practiced half a dozen times on scrap paper before attempting the journal page. So glad the Dylusions paints dry permanent because I washed off the white Sharpie twice before this version of the wording... didn't hurt the background at all (phew).The words, Halley's Comet, didn't quite line up, so instead of starting again I added the horizontal lines and made the letters thicker. Now it looks like its meant to be different :) Nobody knows things are wrong in art unless you tell them! 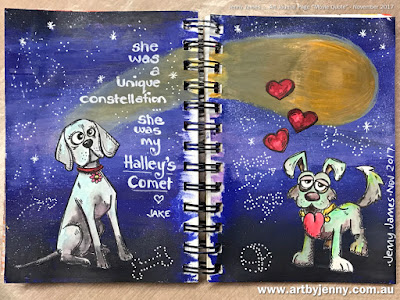 So this is it... Kate and Jake, the crazy dogs in love, stargazing at a passing comet while contemplating the meaning in the stars.

I'm very happy with how this turned out... Tim's dogs are just adorable and they're a joy to use in crafts. You can't help but smile when stamping, colouring and cutting!

Thanks for visiting :) I hope this inspires you to get crazy with art too!